To write a low-level web app with Dart, you need to understand several topics—the DOM tree, nodes, elements, HTML, and the Dart language and libraries.

The interdependencies are circular, but we have to begin somewhere, so we begin with a simple HTML file, which introduces the DOM tree and nodes. From there, you build a bare bones, stripped-down Dart app that contains just enough code to dynamically put text on the page from the Dart side.

Though simple, this example shows you how to connect a Dart app to an HTML page and one way that a Dart app can interact with items on the page. These concepts provide the foundation for more interesting and useful web apps.

About the Dart, HTML, and CSS triumvirate

If you’ve used DartPad, you may have already seen the Dart, HTML, and CSS tabs that let you write the code for a web app. Each of these three languages is responsible for a different aspect of the web app.

A Dart program can respond to events such as mouse clicks, manipulate the elements on a web page dynamically, and save information. Before the web app is deployed, the Dart code must be compiled into JavaScript code.

CSS, which stands for Cascading Style Sheets, describes the appearance of the elements within a document. CSS controls many aspects of formatting: type face, font size, color, background color, borders, margins, and alignment, to name a few.

The Document Object Model (DOM) represents the structure of a web document as a tree of nodes. When an HTML file is loaded into a browser, the browser interprets the HTML and displays the document in a window. The following diagram shows a simple HTML file and the resulting web browser page in Chrome.

HTML uses tags to describe the document. For example, the simple HTML code above uses the <title> tag for the page title, <h1> for a level-one header, and <p> for a paragraph. Some tags in the HTML code, such as <head> and <body>, are not visible on the web page, but do contribute to the structure of the document. 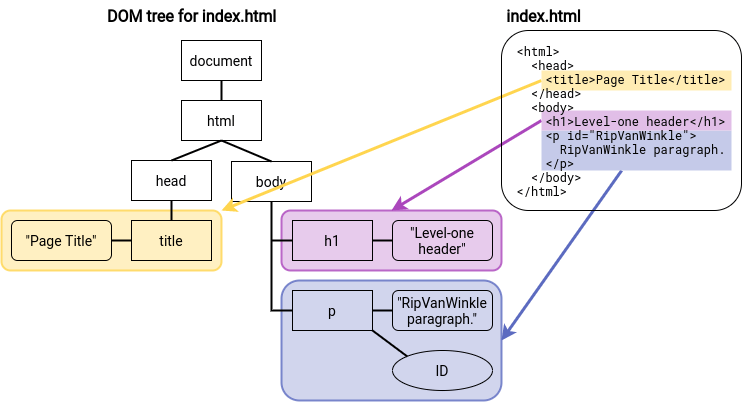 Notice that some tags, such as the <p> paragraph tag, are represented by multiple nodes. The paragraph itself is an element node. The text within the paragraph is a text node (and in some cases, might be a subtree containing many nodes). And the ID is an attribute node.

Except for the root node, each node in the tree has exactly one parent. Each node can have many children.

An HTML file defines the initial structure of a document. Dart or JavaScript can dynamically modify that document by adding, deleting, and modifying the nodes in the DOM tree. When the DOM is changed, the browser immediately re-renders the window.

The diagram shows a small Dart program that makes a modest change to the DOM by dynamically changing a paragraph’s text. A program could add and delete nodes, or even insert an entire subtree of nodes.

备注: These instructions feature DartPad, which hides some HTML boilerplate code. If you want to use any other editor, then we recommend starting with a small Dart web app sample and modifying the non-script tags inside the <body> section. HTML and Dart connections shows the full HTML code.

About the HTML source code

This HTML code is similar to the HTML code in the various diagrams earlier in this tutorial, but it’s even simpler.

In DartPad you need only the tags you really care about—in this case: <p>. You don’t need surrounding tags such as <html> and <body>. Because DartPad knows where your Dart code is, you don’t need a <script> tag.

HTML and Dart connections shows the full HTML code that you need to run your web app outside DartPad.

The paragraph tag has the identifier RipVanWinkle. The Dart code you create in the next step uses this ID to get the paragraph element.

The text in the output pane changes to “Wake up, sleepy head!”

About the Dart source code

Let’s step through the Dart code.

The import directive imports the specified library, making all the classes and functions in that library available to your program.

This program imports Dart’s HTML library, which contains key classes and functions for programming the DOM. Key classes include:

The dart:core library, which is automatically imported, contains many other useful classes, such as: List, a parameterized class that can specify the type of its members. An instance of Element keeps its list of child Element objects in a List<Element>.

This app’s main() function contains a single line of code that is a little like a run-on sentence with multiple things happening one after another. Let’s deconstruct it.

querySelector() is a top-level function provided by the dart:html library that gets an Element object from the DOM.

The argument to querySelector() is a string containing a CSS selector that identifies the object. Most commonly CSS selectors specify classes, identifiers, or attributes. We’ll look at these in more detail later, when we add a CSS file to the mini app. In this case, RipVanWinkle is the unique ID for a paragraph element declared in the HTML file, and #RipVanWinkle specifies that ID.

Another useful function for getting elements from the DOM is querySelectorAll(), which returns multiple Element objects via a list of elements—List<Element>—all of which match the provided selector.

Because DOM elements might be missing, the querySelector() function returns a nullable result, as indicated by the ? in the function’s return type (Element?). A null return value means that no element matches the specified CSS selector.

To use the text property of a returned Element?, the type must be promoted to Element. Because we wrote the HTML and know that the element is always present, we can use the null assertion operator (!) when referring to the element’s properties:

If the element with the #RipVanWinkle ID isn’t guaranteed to be present in the DOM, you can instead use the conditional member access operator (?.) to set text only if the returned element is not null:

If you plan to access the element multiple times and know its type, another option is to typecast the queried element to the expected type:

Setting the text of an Element

In the DOM, the text of a page element is contained in a child node, specifically, a text node. In the following diagram, the node containing the string “RipVanWinkle paragraph.” is a text node.

More complex text, such as text with style changes or embedded links and images, would be represented with a subtree of text nodes and other objects.

In Dart, you can simply use the Element text property, which has a getter and setter that walk the subtree of nodes for you and extract or set their text:

However, if the text node has styles (and thus a subtree), getting text and then setting it immediately is likely to change the DOM, as a result of losing subtree information. Often, as with our RipVanWinkle example, this simplification has no adverse effects.

The assignment operator (=) sets the text of the Element returned by the querySelector() function to the string “Wake up, sleepy head!”.

The Dart web app changed the text in the browser window dynamically at runtime. Of course, placing text on a browser page and doing nothing else could be accomplished with straight HTML. This little app only shows you how to make a connection from a Dart app to a browser page.

In DartPad, the only visible connection between the Dart code and the HTML code is the RipVanWinkle ID.

Here’s the full HTML code for this app, assuming that the Dart code is in a file named main.dart:

The <script> element specifies the location of the compiled Dart code.

Give the app some style with CSS

Most HTML uses cascading style sheets (CSS) to define styles that control the appearance of page elements. Let’s customize the CSS for the mini app.

The display in the output pane immediately changes to reflect the new styles, which apply only to the page element that has the ID RipVanWinkle.

IDs, classes, and other information about elements are established in HTML. Your Dart code can use this information to get elements using a CSS selector—a pattern used to select matching elements in the DOM. CSS selectors allow the CSS, HTML, and Dart code to refer to the same objects. Commonly, a selector specifies an ID, an HTML element type, a class, or an attribute. Selectors can also be nested.

Here are some examples of CSS selectors: 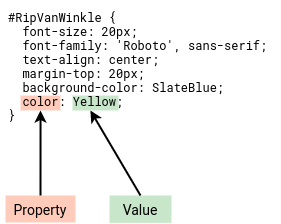 The CSS rule for the RipVanWinkle paragraph specifies several properties; for example, it sets the text color to Yellow.